Project: “Exploring blood production to understand the most aggressive forms of leukaemia“

Abstract:  “Acute myeloid leukaemia (AML) is a highly aggressive form of cancer that begins in bone marrow, where blood cells are produced. In many cases it passes rapidly to the blood.

Blood is composed of different types of cells each of which his its functions, from transporting oxygen to fighting infections. Control over the production of blood, which is influenced by multiple factors, is not fully understood, and consequently neither are its alterations in leukaemia. The production of blood cells is controlled by a series of regulatory mechanisms known as transcription factors (TF) and chromatin remodelling factors (CRF).

The goal of our project is to identify alterations produced at the level of these factors and which lead to the development of leukaemias, in order to find new treatments that address the cause of the disease. We will use healthy mice and mice with leukaemias in which we will eliminate the expression of these factors to see the effect they have on the illness. Once we have determined key elements in the development of leukaemias in the mice, we will design similar experiments in human leukaemia cells. If we obtain the same results we will develop drugs aimed at altering these TFs and CRFs, which may enable us to identify new treatments for the disease.”

Our role: bioinformatics on both data analysis and generation of novel methodologies.

Abstract:  “Despite all the gained knowledge over the last decades, understanding healthy ageing, especially immune system related, is a significant unmet medical need for an ageing population. Stem cell niches, and in particular the hematopoietic stem cell niche, present an opportunity to study physiology at the tissue level in healthy individuals during ageing (and its relation with diseases). In AgeingBMN, we leverage this opportunity to define the heterogeneity of the niche’s components, the interconnectedness that determines its function and the changes associated with ageing. While through the knowledge generated thus far we envision the niche as a dynamic place, reductionist approaches describing single elements of a niche (mesenchyme) and their impact on stem cells (parenchyma) are reaching their “explanatory limits”. Therefore, we propose an unbiased single-cell multi-omics-based Systems Medicine approach and its validation aimed at understanding in human:

2) lineage relationships that define a particular cell type in the hematopoietic niche;

3) identification of functional units that parenchymal and mesenchymal cells form in the hematopoietic niche; and

To that end, AgeingBMN brings together complementary skills in stem cell biology at the organism, tissue and cellular level, last generation single-cell multi-omics and integrative computational and mathematical modelling of complex biological systems. This ground-breaking, multidisciplinary project will provide the roadmap to define preventive and therapeutic strategies aimed at healthy ageing, adding quality of life and providing an analytical framework to be further exported into a disease context.”

Our role: Leading the project. Experimental design. Bioinformatics on both data analysis and generation of novel methodologies.

Abstract:  “DECISION strives to better understand the pathophysiology of decompensated cirrhosis leading to acute-on-chronic liver failure (ACLF) at the systems level by taking advantage of already existing large and clinically well-characterized patient cohorts. The ultimate goal is to significantly reduce mortality through combinatorial therapies that are tailored to the specific needs of individual patients. Part of this endeavour is to develop (1) a reliable prognostic test to identify patients that are at risk for a poor outcome following standard therapy but who may benefit from a novel and personalised combinatorial therapy, and (2) a robust response test to predict the success of a novel combinatorial therapy as opposed to more aggressive solutions like a liver transplant.”

Project: “Characterisation of B-cell differentiation in the Bone Marrow in humans.“

STATegRa is a Bioconductor package with classes and tools for multi-omics data integration. The new biomedical research environment, where many data types (multi-omics) are being generated in a daily basis, opens a new world around data integration. If we are able to combine different data or regulatory layers, we’ll gain information and move to a holistic world view. However, new tools to deal with these large and heterogeneous data sets in an integrative manner are needed. STATegRa package wants to provide not only the tools but a consolidated framework for data integration.

The Navarre 1000 Genomes Project (NaGen1000) was launched in 2016 as an initiative promoted by the biomedical research center Navarrabiomed to set the stage for future implementation of sequencing as a routine resource for the development of genomic medicine in SNS-Osasunbidea.

This project, pioneering in the scope of the Spanish National Health System, is based on whole genome sequencing and focused on personalized medicine. It aims to sequence the whole genomes of over a thousand patients with rare diseases or certain types of cancer, and their families, to understand the genetic components of the disease in order to provide better diagnosis and, ultimately, better treatments.

At the Translational Bioinformatics Unit, we provide bioinformatics and computational support to the NAGEN project. We are developing and implementing bioinformatics analysis pipelines (from sequence to annotated variants), data analysis and visualization tools, and clinical data management databases for storing all the information related to the participants, their samples and results obtained.

In addition, we keep constant communication and learning from experiences from other genome analysis centers in Spain such as FPS (Sevilla, Joaquin Dopazo) and CNAG (Barcelona, Sergi Beltran). During 2018 PharmaNAGEN, a project extending the genomic applications to pharmacogenetics started and we are involved in the bioinformatics pipeline and software deployment.

In TransBio we are collaborating with the Center for Host Microbiome Interaction to identify and characterize the human Oral Microbiome. We are working in the generation and characterization of the oral microbiome gene catalog and its applications in health and disease. We are part of a collaobration including King´s College London and MetaGenoPolis.

The rise and growth of Systems Biology following the sequencing of the human genome has been astounding. Early on, an iterative wet-dry methodology was formulated which turned out to be a successful approach in deciphering biological Complexity. Such type of analysis effectively iden- tified and associated molecular network signatures operative in biological processes across different systems. Yet, it has proven difficult to distinguish between causes and conse- quences, thus making it challenging to attack medical questions where we require precise causative drug targets and disease mechanisms beyond a web of associated markers. 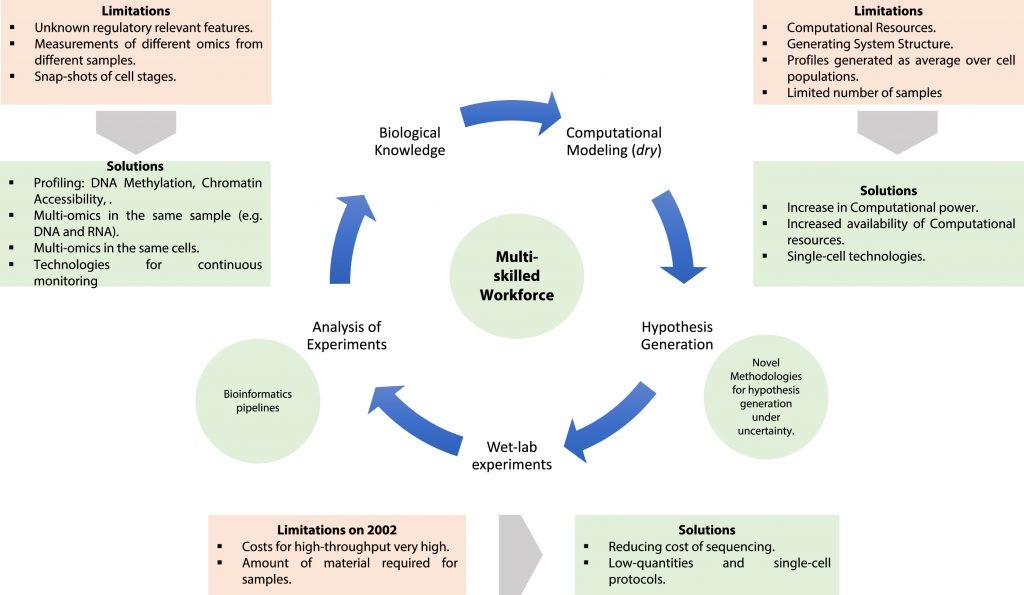